About Us - The Dal Porto Story 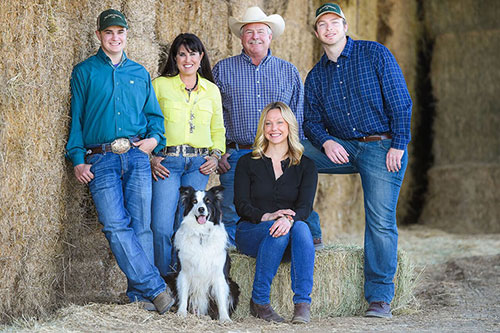 David and Jeanene Dal Porto own and operate Dal Porto Livestock, which consists of both registered and commercial Angus operations, near Oakley and Brentwood, Calif., as well as other areas in the northern part of the state. They have three children - Lindsey, A.J. and Dawson. All three have been active as youth in 4-H and FFA, as well as in exhibiting Angus cattle on local, state and national levels.

David purchased his first registered-Angus heifer at 9 years old, and has built a herd of registered - and commercial-Angus cows that is the foundation of their family operation today. David attended Chico State University and majored in ag business management. While at Chico State he was a member of the livestock judging team. He continued that endeavor, judging shows at local, regional and national levels, including the NWSS in Denver, Colo.

After college, David returned to Oakley to work on the family ranch and start building his own herd of Angus cattle. This foundation has developed into what's known today as Dal Porto Livestock. David spent many years expanding his herd of registered females and built strong and valued relationships with commercial producers throughout the West. He was awarded champion range bull honors at many leading consignment sales, including the Cal Poly Bull Test, Cow Palace and the California State Fair.

In 1992, Dal Porto Livestock partnered with the Medeiros family of Rancho Casino to host their own production sale. This event has had tremendous success and growth. It is now recognized as one of the most sustainable bull sales in the West. They will host their 23rd annual sale this fall.

The success of this sale has not gone unrecognized. In 2011, David and his bull sale partner, David Medeiros, were awarded the CAB Seedstock Commitment to Excellence Award at the CAB Annual Conference. This award was for their service to all aspects of the industry, including fellow Angus breeders, the commercial producer, the feedlot and the consumer.

For many years, Dal Porto Livestock has fed its own commercial steers and heifers at Beller Feedlot of Lindsay, Neb. Owner-operator Terry Beller is another past CAB Commitment to Excellence recipient for feedlots and was a natural fit for Dal Porto Livestock to diversify its operation at a high level.

David is a past board member of the California Angus Association and the Western States Angus Association. He has served as president of Contra Costa / Alameda County (CCAC) Cattlemen's Association and has chaired various committees for the California Cattlemen's Association (CCA). In 2001 he was recognized as Seedstock Producer of the Year by the California Beef Cattle Improvement Association (CBCIA), and he was the CCAC Cattleman of the Year in 1992. David has been a member of the local school board and the RD799 water board. He chaired and served on many local youth, FFA and 4-H boards. David's lifelong work and passion is Angus cattle. His sole source of income is derived from Dal Porto Livestock and the management of Ironhouse Cattle Co., a large commercial cow-calf and stocker operation in northern California.

Under David's management both Dal Porto Livestock and Ironhouse have been on the cutting edge of genetic evaluation and implementing new technologies. From the collection of weights and carcass data to ultrasound to DNA, David has firsthand experience at every level in the evolution of performance information and how to apply it.

He complements that knowledge with a management background developed from his experience in the most overregulated and one of the highest-resource-cost areas of the country. As his record and accolades show, he has a keen understanding of all levels of the beef cattle industry. More importantly, he has an intense desire to maintain and enhance the leadership and value of Angus cattle.