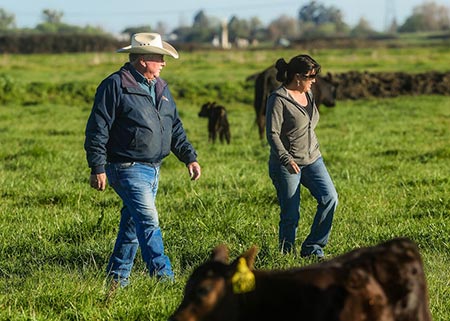 From the beginning, Dal Porto and Medeiros knew their customers needed bulls that worked in their environment. The two saw a common opportunity in the late 1970s and early 1980s, which led to their eventual collaboration: Commercial cattlemen were looking to the Angus breed for balance and calving ease in their replacement heifers.

"That was the market where we saw a huge opportunity for us to sell seedstock. We wanted to offer a large number of bulls that had low-birth-weight EPDs (expected progeny differences), and several generations of it," Dal Porto says.

"We believe you should never have to pull a calf," Medeiros says. "Because we stack generations for those traits, they are predictable and dependable."

A bull has to have two or three generations of low or moderate birth weight to call him a heifer bull for their customers, and those traits must be passed along to the maternal end of the herd, as well. Bulls are only half the equation; and they're used to produce great replacement heifers that will stack maternal traits on both sides.

"We have a short breeding season, so if they don't breed we cull them," Dal Porto says. "There are no second chances. We've both drawn the line without any give on the females and what it takes to be a part of the program."

In typical unison, Medeiros agrees that fertility is their No. 1 culling consideration. Then, cows from their bulls must be able to calve unassisted and excel in udder quality, mothering ability and disposition.

"We're going for practical, production traits first, but the heritability of carcass merit means we can add that into the mix, too," says David Medeiros, shown with his wife, Carol. Fertility is the No. 1 culling criteria for their herd.

Medeiros says those characteristics have to come in combination with end-product performance, too. "There are enough cattle out there that we can identify and stack generations that have that lower birth weight, wean a good-sized calf, and add some carcass to go along with it.

After putting that common maternal base in place, their commercial customers have diverse interests that need individual attention.

"We always want to ask our customers: What's your goal?" Medeiros says. "Are you keeping females for replacement? Are you selling your calves at weaning or as yearlings? Are you selling them to a feedlot operator who you will be dealing with year after year, so you want those cattle to perform at the feedlot so they will come back for more? We have to understand their herd and what their goals are."

That means breeding bulls must subtly shine in different areas while remaining true to their baseline focus on cow functionality. The duo helps their California-based customers identify needs and solutions by utilizing the EPDs and past performance data on their bulls.

Being within 100 miles of San Francisco creates a common theme amongst their customers. Most sell calves at weaning, leaving the 1,000-mile trek to the feeding belt up to their buyers. That means they want to sell as many pounds as possible, but they also know buyers are analyzing what's behind those pounds.

"David [Medeiros] knows our cattle herd so well. He helps with branding, he helps with shipping, he sees what I see. I think of them as partners in my business."